[Warning: The below contains major spoilers for the Grey’s Anatomy Season 19, Episode 4, “Haunted.”]

The October 27 episode of Grey’s Anatomy is titled “Haunted,” but the only scary thing about Season 19 Episode 4 is how little happens. Like Necco Wafers in Trick-or-Treat’s haul, this episode just feels like filler to us.

The “haunted” person in this episode is Griffith (Alexis Floyd). At the start of the episode, the other interns watch and re-watch a viral video of a doctor throwing a tantrum and destroying a hospital room. Turns out that doctor was Griffith. And after joining Maggie (Kelly McCreary) on an operation, Griffith explains it all…

Maggie asks Griffith in the laundry room why she was kicked out of her last internship program. Griffith says she was ousted for being too “aggressive”, when in reality she was just speaking out against the racism that was rampant in this hospital. And when she was fired, Griffith legitimately got mad, and she ran away, throwing supplies and nearly knocking a sink out of a wall. And now surveillance footage of that incident has leaked online and gone viral. But Maggie tells Griffith that she’s a great doctor who belongs to a great surgical program like Gray Sloan’s. “We see you,” Maggie said. “Never let that haunt you again.”

And at the end of the episode, Griffith confesses and tells the other trainees that she was the one in the video. But they don’t make fun of her; they sympathize. They tell him that they would also have gone mad with rage. 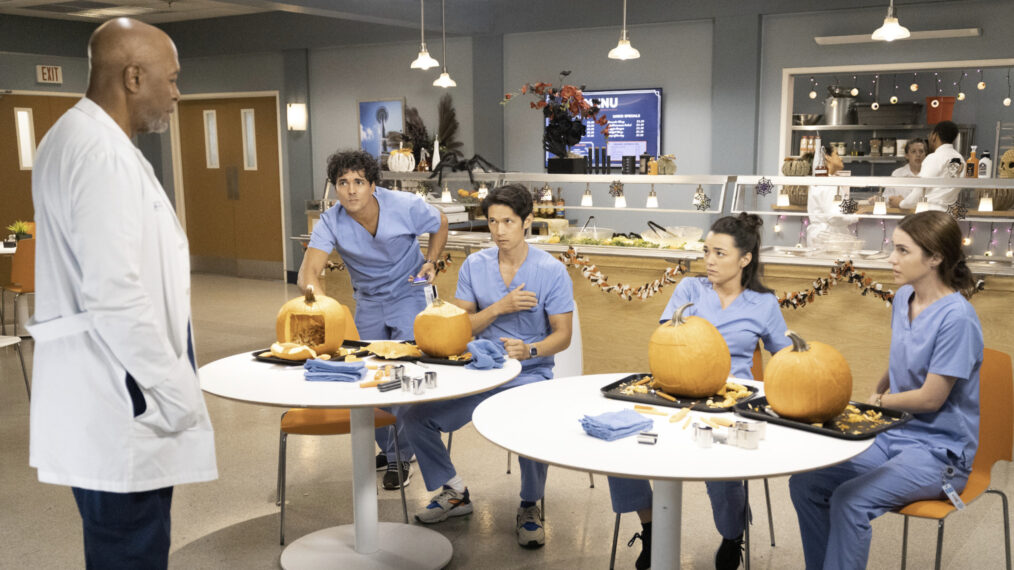 This “trauma”, however, turns out to be a corpse with a knife wound. Owen (Kevin McKidd), Meredith (Ellen Pompeo), Nick (Scott Speedman) and Winston (Anthony Hill) explain that with the rise of laparoscopic surgery, surgical interns are not sufficiently exposed to serious injuries. So now the contestants are asking Gray Sloan’s newest class of trainees to practice their trauma skills on cadavers donated to science. 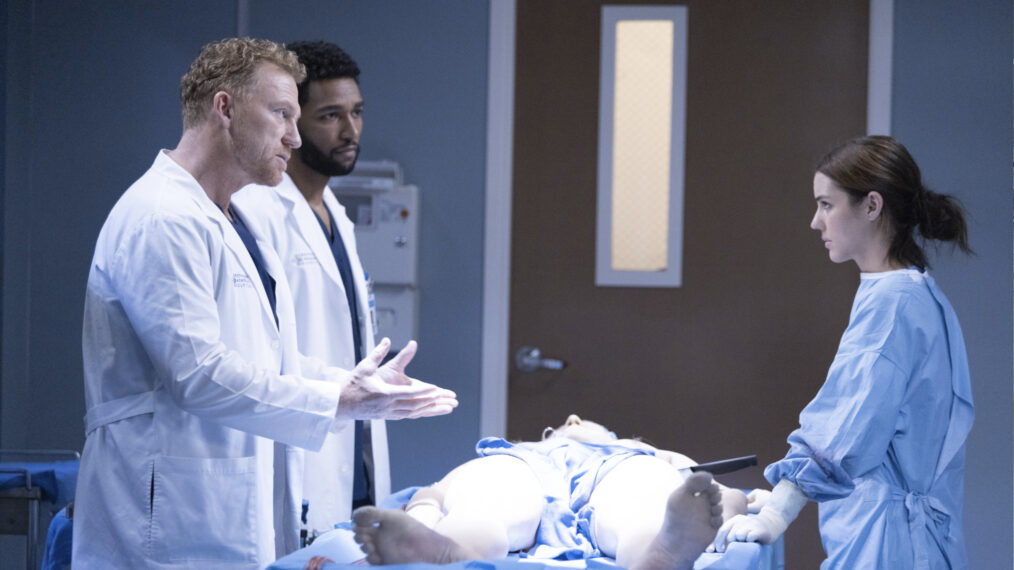 The interns fail to save their first corpse from dying (again), but with some tough love from Owen and Winston, they reunite as a team and save the life of a second corpse. (Well…you know what we mean.) Owen chooses Adams (Niko Terho) as the exercise MVP, but Adams asks if all the trainees can participate in the grand prix surgery. They are a team now, after all.

Speaking of Owen and Winston, they bond over the frustrations of working under their respective spouses. Owen asks if Winston still loves Maggie. Winston says yes. Owen tells her to protect this love before resentment takes over. And Winston, clearly taking that advice to heart, later tells a surprised Maggie that he decides to quit cardio. 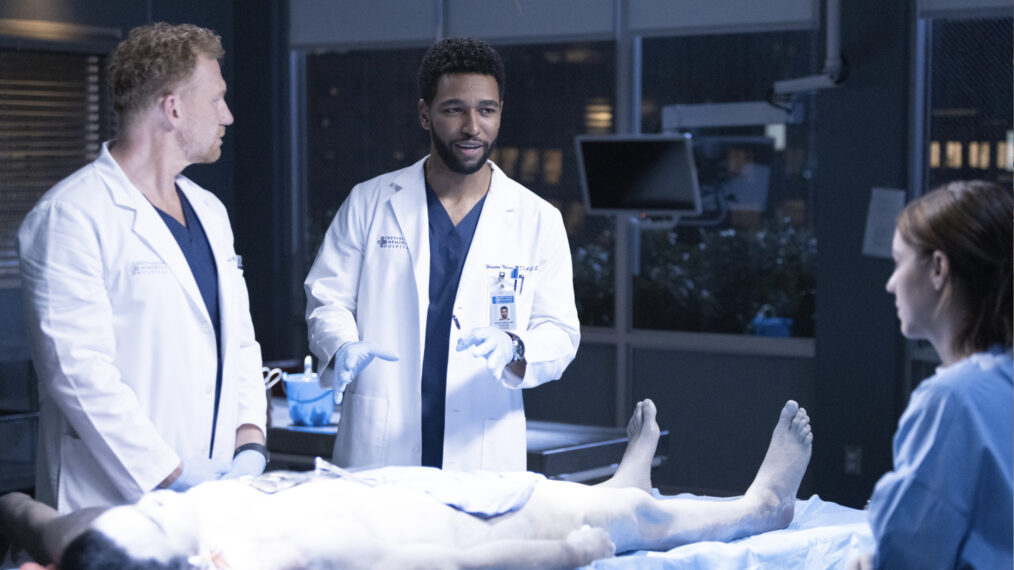 Speaking of Owen, we get a glimpse of how strained his relationship with Teddy (Kim Raver) is when Teddy has a heart-to-heart with Link (Chris Carmack) during a coffee break in the ambulance bay. When Link says he’s crazy about Jo (Camilla Luddington) – more on that later – Teddy advises him to move on with other women to protect his platonic relationship with Jo. “There’s nothing like ruining someone else’s life to ruin a friendship,” she says.

Even so, Teddy still seems nice to her husband. She finds Owen asleep in a guard room and wakes him up to bring back a sweet memory: while they were on duty, Teddy complained about all the holidays they were missing, so Owen organized an Easter egg hunt. with red, white and blue plastic eggs filled with Valentine’s Day. Owen revels with Teddy in this memory… but then he falls asleep again. Romantic moment over.

Oh, and about that confession from Link: he now realizes he missed his chance to date Jo when she still had feelings for him because he was too attached to Amelia (Caterina Scorsone) at the time.

This episode’s patients of the week are Jarah and River, two teenagers who tried to jump off a roof into a swimming pool while tripping on LSD. Jarah failed to clear the landing and suffered severe blunt force trauma to the chest. River, meanwhile, made it into the pool and escaped with minor injuries. But at the hospital, a still tripping river escapes the ER and jumps off the top of an ambulance parked on the sidewalk below. And again, he escapes serious injury – mostly because he practically landed on top of Jo. River has a concussion and a broken leg; Jo sprains her wrist.

You know who else is having a bad day? Levi (Jake Borelli), who is so overworked that he yells at the nurses. It’s very different from Schmitt, and when Richard overhears him making fun of another colleague, Richard tells him to take a break. But Levi argues that if he pauses, people will die.

Richard then goes to Joe’s Bar to try to convince Helm (Jaicy Elliot) to give up his career as a bartender and return to the hospital. But Helm does just fine with the drinks. She reminds Richard that, unlike what happened with Levi, no one offered him a job when the residency program was closed. And now she’s working a job where people appreciate her skills. (We certainly hope Helm eventually changes his mind.)

So if Richard can’t get Helm back, he can at least ease some of Levi’s burden. He tells Levi that he knows the hospital failed Levi’s intern class, but Richard is determined not to lose Levi. So Richard says he’s going to make sure the participants pick up the slack left by the closure of the residency program. 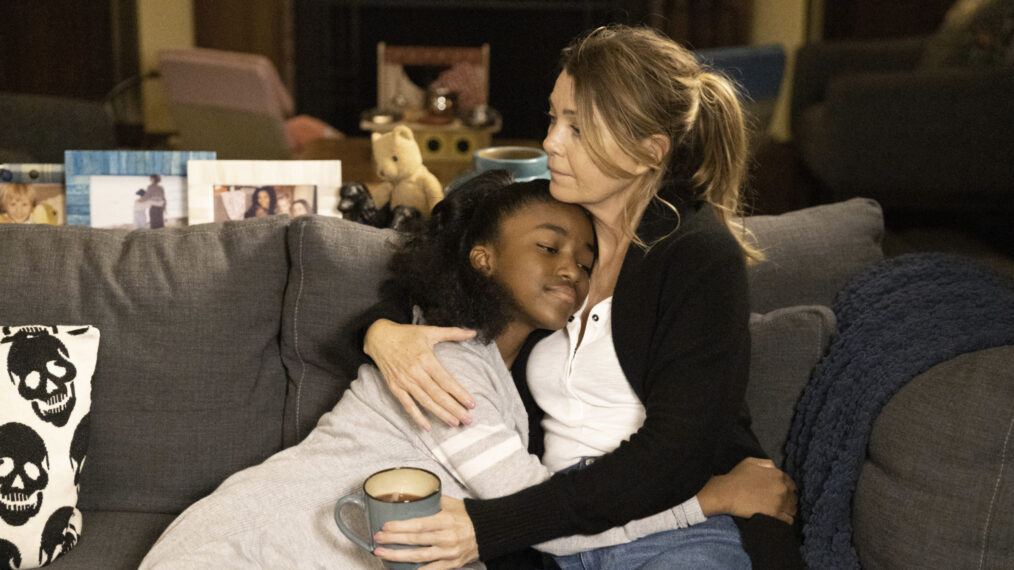 As for Meredith, she spends most of the episode in a hotel room with Nick (Scott Speedman). She tells Nick how difficult it was to find a school where Zola, whose giftedness leads to anxiety, can be supported. But later, Zola calls Mer in tears after a slumber party, and that’s pretty much the end of Mer and Nick’s slumber party. Back at Chez Grey, Zola tells Mer that she couldn’t sleep and couldn’t breathe after the lights went out, and Mer assures her that they’ll find her a school with teachers who can help her. Sounds like maybe that’s the storyline that’s giving Mer its big Season 19 hiatus, isn’t it?